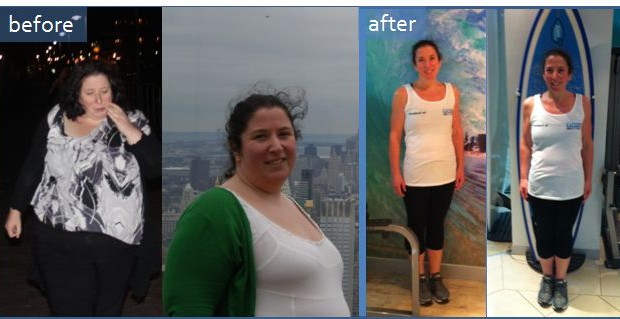 Without a doubt the six-week Personal Training program was the best thing I have ever done.

Below is a testimonial from one of  our inspiring members, who has shown such great strength and determination to get to her goal weight…

“At the beginning of 2012 I promised myself I was going to do something about my weight. After nearly two months of putting it off I decided it was time to take action and commit to something. I decided to give the Manly Beach Health Club a go.

I never imagined myself joining a gym as I had always found them daunting and intimidating and, given my size and lack of fitness, I thought I didn’t belong there. So to give myself an out, at first I opted to go on a month-by-month plan. To my own surprise, within a couple of months I committed to a 12-month membership!

For the first four to five months I worked out on my own and managed to lose around 15 kilos. It was at this point that I hit a plateau. I could see some of my bad habits starting to creep back in. At plateau point in the past, I had always given up and ended up putting more weight back on than I lost. I knew something had to change but I didn’t know what.

I noticed posters up around the gym offering a special on personal training sessions. So I took my first tentative steps in asking for help and had a chat to Adam about personal training. Before I knew it I was doing my very first training session. At this stage it became apparent to me that I didn’t know what I was doing and if I really wanted to lose weight I was going to need help.

After speaking with Adam and Sam I started a six-week program that included three personal training sessions a week with Adam, keeping a food diary and weekly reading with homework! In the first week I set off on my supermarket excursion armed with pen and pad to write down calories and fat counts in all types of food. The people in the supermarket were so concerned about what I was doing, they approached me to make sure I wasn’t spying. When I explained, they decided to yell it out across the entire supermarket so all the other employees would know what I was doing – a very, very embarrassing moment!

Without a doubt the six-week Personal Training program was the best thing I have ever done. It was only the beginning but it changed everything!

I have continued to train with Adam; he has seen me through many highs and lows and has believed in me and encouraged me to do many things that I would have never thought possible.

What has surprised me the most is the friendship, support and encouragement of so many people at the gym. Whether I am training with Adam, doing a class or working out on my own I always end up having a chat and a laugh with someone. The community feel at MBHC has helped me incorporate exercise into my everyday life. I now look forward to working out instead of approaching it with dread.

When I joined MBHC I never imagined I would lose 60 kilos in 13 months. I have so much more energy and confidence now and I’m loving shopping for a new wardrobe!

Adam, Sam and the entire MBHC team have been so incredibly supportive. MBHC team, words cannot say how much I appreciate what you have given me. Thank you.”